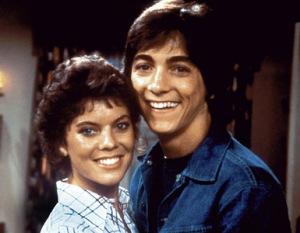 Yeah, me neither. It was before my time. Spinoff from Happy Days, Scott Baio from Charles in Charge fame? Anyway, the “Chachi” I’m talking about here is my daughter’s beloved nickname for her pacifier…which she still has. I’m so embarrassed and ashamed to admit that I let my 2 1/2 year old still use a pacifier. I was always one of those people who said as soon as the kid could walk, that thing was gone. Yet, here we are a year and a half after she started walking and she clings to them like a junkie to a needle, like a fat kid to cake, like me to my shred of sanity.

We called the pacifier a paci or passy like other families, bypassing the outdated term of binky. Chachi came about organically. She called it something that sounded like chachi and it stuck. She even had a little song and dance about it. “I got a chachi. I got a chachi” swaying her little hips side to side while waving her chachi in the air. 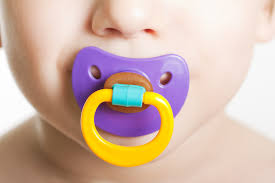 If you asked my friends, it sounded like she was singing about something else entirely.

She’s a full-on chachi hoarder! It’s not like she’s happy with just one. Oh no! That would be far too simple. She needs a minimum of two and prefers three or more. I remember how it happened. When she was nine months old we used to stock her crib with a couple extras for those middle of the night wakings so she could flail around and find one in her sleep. Well, that ultimately backfired on us and now she needs them to cuddle and rub against her nose. However, this might be more than a learned behavior it might be genetic and the person I have to blame is myself! Apparently I was a chachi fanatic just like my chip off the ol’ block. However, I called it a poey (Long o sound like Joey with a p–didn’t want you thinking I called it a pooey). I used to rub my nose with the poey to soothe myself as well. One day when I was two my mom told me “no more poey” so I calmly turned it over without so much as a fuss. Not going to be the case for my little petunia. I’ve been getting her used to the idea that chachis are only for babies and now that her sister is no longer a baby, we need to pass them on. She adamantly refuses this conversation and idea. I’ve even told her the chachi fairy will bring her an awesome present, yet she tells me she’s not giving them up. Eff the Chachi Fairy in so many words.

Not too long ago I read something by Erma Bombeck about pacifiers from her book, Motherhood: The Second Oldest Profession. She talks about the mothers of her generation being closet pacifier advocates. She never wanted her own mother to know that she used them with her children. I get it. I start to perspire when I think about the world witnessing my giant child with a chachi in her mouth. I can just hear the judgement swirling around their heads. Lucky for me she only uses them in the car and in bed.

Erma writes that the pacifier signaled that we can’t cope with our children. Ding! Ding! Ding! Hit the nail on the head–at least in my case. When her mother saw her grandchild with a pacifier she said, “Do you know that if you keep using this pacifier, by the time this baby is four years old, her teeth will come in crooked and her mouth will have a permanent pout?” To which Erma replied, “Do you know, Mother, if I do not use that pacifier, I may never permit her to become four?” My sentiments exactly! And why my toddler still has a chachi obsession! If she didn’t use those things at night, who knows what kind of crappy sleeper I’d have on my hands. Guess I’ll find out soon enough when I take them away.

“We American pioneers of the pacifier have given it the respectability it deserves. After all, what other force in the world has the power to heal, stop tears, end suffering, sustain life, restore world peace, and is the elixir that grants mothers everywhere the opportunity to sleep…perchance to dream?”

Wish I could’ve remembered this passage when I was up at 2 am this morning frantically searching the dark corners of my baby’s crib for her stinking pacifier to quiet her uproarious cries. Maybe then I wouldn’t have cursed those plastic pieces of crap to hell. Then it hit me, I’m the chachi pusher.

Hello, my name is One Funny Mummy and I’m an addict…of peace and quiet!

3 thoughts on “Addicted to Chachi”

Story of my life! 😂 Make sure you’re following @six_pack_mom because she’s next level funny!
No joke! 🤑 Follow the wonderful @momwithaboysname for all the best laughs!
I completely understand now & am sorry for getting all judgy when I had no idea!
There’s no comparison 😭 @oneawkwardmom is ridiculously funny and a must follow!
Oh well I tried 😂 Follow the super funny & relatable @new_england_dad for all the best parenting humor!
Enjoying every moment 😂 @cerealonthefloor is so damn funny! Follow her for all the best laughs!