At times, the first year of parenthood is a literal shitstorm. And on top of that, it’s a shitstorm of emotions.

Our lives change overnight. One minute we’re just a couple of normal, carefree people and the next we’re mothers and fathers in charge of a tiny infant who we want to have the very best life. But we’ve never done anything like this before, so we feel as though we’re screwing them up no matter what we do.

Now that my kids are toddlers, it’s hard for me to even remember the first year of parenthood. It’s all such a blur of random memories. Thank god for pictures because a lot of it has been lost to sleepless nights and crazy chaotic days or just my own self-preservation.

And speaking of pictures, #NewDad, is an awesome new picture book for adults.  A first time dad documents his journey into parenthood with humorous photographs and funny anecdotes that we, as parents, can all relate to. When I say “picture book” it’s almost like his Instagram account has jumped off the screen and into your hands. The opening page is a photograph of the author, Josh Gloer, resting his head on the steering wheel of his car while the caption reads, “Just took a nap…at a stoplight.” 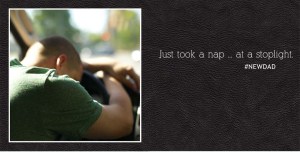 Being a new parent is utterly exhausting and this sums up every parent’s life well beyond the newborn stage. You think  you’re just going to close your eyes for a brief respite, and the next thing you know, you’re drooling and a police officer is shaking you awake.

From being sprayed with spit-up, to “nailing” a work presentation with poop on his arm, to being in bed on a Friday night by 9 o’clock, Gloer captures the quintessential milestones in the life of a parent perfectly. Never do we feel more unprepared and more unsure of what to do when we become parents, but the best thing to remember is that we’ve all been there, it’s normal, and as Gloer puts it, “If you’re a #NewDad…you get it.”